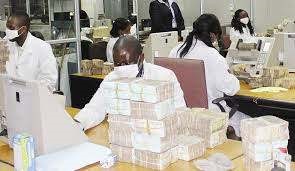 Treasury bill offer by the central bank attracted over K1.3 billion at a success rate range of 14.43 percent last Thursday, Recently, the Bank of Zambia (Boz) has come through the Open Market Operations(OMO) in an effort to raise government funding.  The OMO is one of the central bank’s innovative and significant policy initiatives that involves the purchase from or sale of funds to commercial banks with a sole purpose of smoothening out short-term liquidity imbalances to influence short-term interest rates.  According to Zanaco’ s Tuesday treasury update, Boz came to the market injecting liquidity through OMO. “An unlimited amount was offered and K1,370,000,000 was big and accepted at a success rate range of 14.43 percent to 14.82 percent.” Zanaco stated.  The market also saw liquidity growth by 34.6 percent to K3,782billion from K2.809 billion recorded previously. Funds traded on the interbank also grew by 46.7 percent to K772million from K526million traded previously.  Meanwhile, the Kwacha on Tuesday reversed some of its early losses to close slightly stronger against the dollar as corporates sold the greenback ahead of tax obligations due at the end of the week.

“The Kwacha got some support mid-way through the session on increased supply to close at K18.270 / K18.320 from an opening level of K18.350 / K18.400 against the dollar on the bid and offer respectively. Near term, the local unit is likely to continue posting minor gains.” Absa Bank Zambia Plc said.

On commodities, Reuters reported that gold prices fell on Tuesday, 11th August 2020 as the dollar clung to recent gains whole expectations of a United States stimulus deal boosted risk appetite and prompted investors to take profits from bullion’s run to a record high.  Spot gold plunged 4.2 percent to US$1,941.71 per ounce retreating from last week’s record of US$2,072.50.  Similarly, the three-month copper price on the London Metal Exchange was slightly lower during morning trading, after failing to close above the psychological level of US$6,400 per tonne on Monday while the forward curve has tightened.  Source Daily Mail