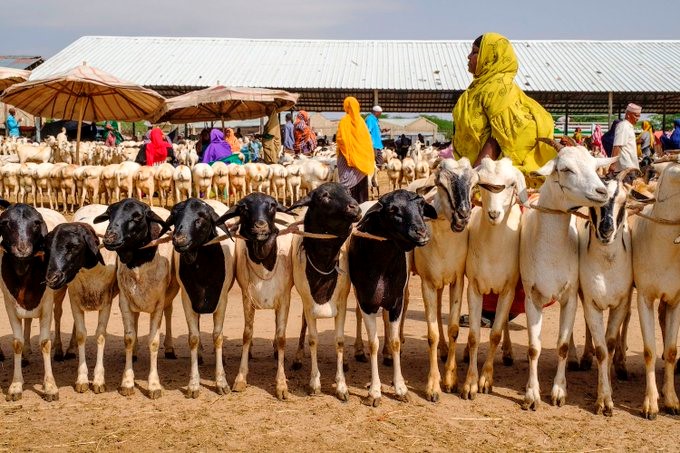 The Hajj, a time of celebration when Muslims journey to Mecca each year. A pilgrimage that economically benefits Somali cattle breeders and traders whose millions of livestock are imported by Saudi Arabia to nourish the attending pilgrims.

However, the dramatic downsizing and imposed restrictions of the event in light of COVID-19 is a hard blow to the Somali economy. Nur Hassan Abikar, a local livestock trade, shares his frustrations, “This year is so different from past years because the price of the goats has dramatically declined as Coronavirus has had a negative impact on us. Thanks to Allah, Saudi Arabia used to import more of the goats, and there were the local NGOs to feed the needy people. Now all those activities have stopped because of the virus.”

The Hajj, which began last week, is compulsory for all Muslims, who are physically and financially able, to undertake at least once in their lives and involves a pilgrimage to the Holy City of Makkah and its Great Mosque.  But this year the Saudi authorities have limited the Hajj to those already in the country — fewer than 10,000 domestic pilgrims are expected, compared to the two million visitors, mostly foreigners, who attended last year’s ceremony — thus cancelling the annual ceremony for the most part.

Saudi demand accounts for nearly two-thirds of Somalia’s annual livestock exports, according to the World Bank, which reports that more than five million sheep, goats, camels and livestock were shipped north from Somali ports via the Gulf of Aden and the Red Sea to Saudi Arabia in 2015. Exports are expected to be cut in half this year, mainly due to travel restrictions imposed by COVID-19. The evaporation of exports has led to oversupply in local markets where prices have dropped dramatically, with camels being sold for $500, half their usual price, according to Khalif. “The cancellation of the Hajj has massive implications for the lives and livelihoods of the Somali people,” said Ahmed Khalif, Country Director for Somalia at the charity Action Against Hunger, adding that livestock accounts for about 60% of household income in this predominantly rural country. He continued, “This is a major blow to Somali pastoralist households in particular, who survive on livestock exports to Saudi Arabia. Up to three-quarters of Somalia’s export earnings come from livestock making the sale of animals abroad a crucial lifeline for the Somali economy.” All this is great news for a relatively small number of affluent consumers, but a disaster for the majority of local breeders who rely on sales to buy food, pay off debts and cover basic costs of living.