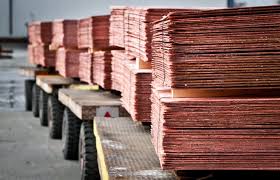 The price of Zambia’s copper has risen marginally driven by increased demand by top consumer China. Reuters reports that the price of copper scaled a 4-1/2 – month peak on Monday 9th December 2019 after Chinese data over the weekend showed solid imports of the metal last month, signalling an improvement in the manufacturing sector despite the impact of the China – United States trade tussle on demand. Benchmark Londo Metal Exchange copper rose 0.7 percentage point to US$6,032 per tonne in the morning, after climbing to US$6,038 earlier during the session, its strongest since July 25. Similarly, Shanghai Futures Exchange’s most-traded copper contract ended up 2.3 percent at 48,440 yuan (US$6,881.76) per tonne, off the day’s high of 48,470 yuan its highest since July 22. Australia based bank ANZ says the better-than-expected import data may point to firming domestic demand after factory activity showed surprising signs of improvement recently, although analysts have noted the recovery could be difficult to sustain amid trade risks. “China’s commodity imports for November 2019 were stronger than expected, suggesting economic growth has stabilised after quarter three’s softness.” ANZ reported. The bank says with trade tension keeping inventories relatively low, import demand should be well supported into the year-end. Prices have broken above the 200 –day moving average of US$5,990 and if held on, may send a buy signal to momentum following funds to spark further gains. China’s copper imports rose 12.1 percent in November from the previous month to their highest in more than a year, as an unexpected improvements in the manufacturing sector drove up demand. Source: Daily Mail
LOCAL